About 2 years ago, I heard of a project that was being started by sci-fi writer, Neal Gaiman. The idea was to have conversations that would inspire sci-fi writers to write less dystopian novels and focus on imagining the kind of World we would like to live in.

A book was released, a continuing conversation about writers inspiring scientists and I watched most of the talk from the Google Talks YouTube channel, to which I am subscribed.

What I heard left me uninspired. We are living in a time of greatly accelerated scientific and technological innovation. Much of the innovation was inspired by writers who looked to the distant future (Star Trek) to bring us computers that speak to us, virtual reality, medical tricorders and even the ipad.

They did not want to read stories about hackers, holocausts, and hyperspace. Hackers have become the new political activists because of complete government control and surveillance, genocides have become the mainstay of human existence as we look for bigger and more devastating ways to be rid of those with opposing views, hyperspace may be a dream, but maybe it has a sister or cousin around whom we can innovate.

I’m thinking this may be a problem only for me. I love grand ideas, technologies that make me want to live there. I hope there are people out there like me, who want to dream big dreams. After all:

I curate a magazine where important advances in science and technology are fodder for my imagination. Come visit. 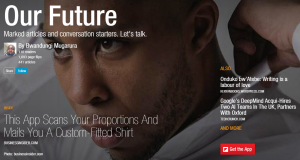